The Sydney Morning Herald: How Gerard and Genevieve are challenging the film industry

GENEVIEVE: The first time I met Gerard, he quoted Shakespeare to me. It was 2008 and I was a student working on a short film for Down Syndrome NSW and Gerard was one of the participants. When I arrived at his home, Gerard burst through the front door and launched into a soliloquy from Romeo and Juliet:.

“But soft, what light through yonder window breaks …” He then went on to imitate Frank Spencer from Some Mothers Do ‘Ave ‘Em and recited lines from The Bold and the Beautiful.” 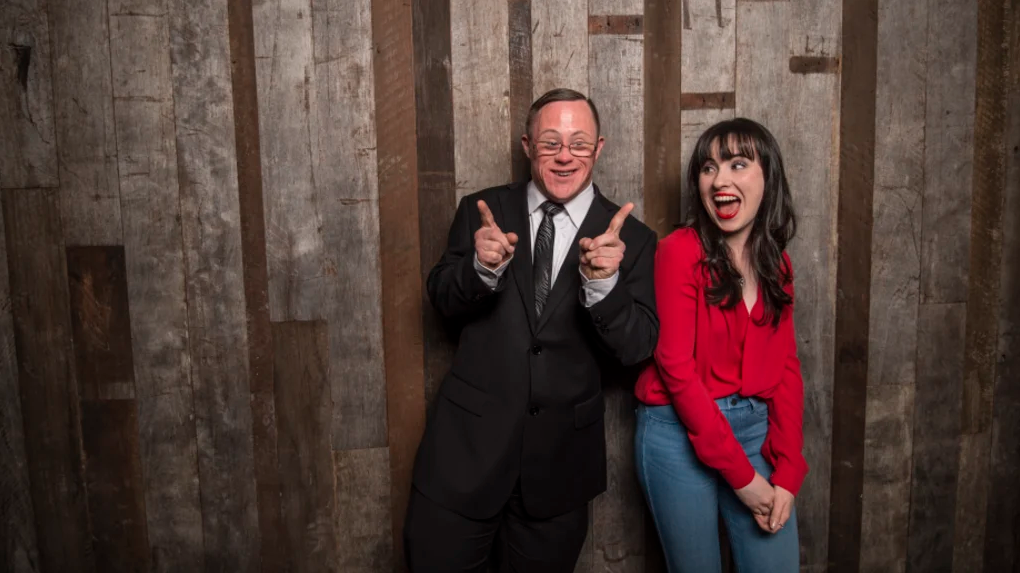 “Gerard challenges me to have more fun and not to worry about what others think,” says Genevieve Clay-Smith. CREDIT: WOLTER PEETERS

In 2008 I wrote and directed a short film, Be My Brother, and cast Gerard in the lead role. Gerard had never acted in a film before and was self-conscious about his Down syndrome. In one particular scene, Gerard was struggling to pronounce words and said, “I can’t do it! I just can’t do it!” I said, “Gerard, the way you speak is the way your character speaks and there’s nothing to worry about. You are wonderful just the way you are.” We wrapped up filming and in 2009 submitted the film to Tropfest, not thinking we would win. But in front of a massive crowd and a TV audience, the organisers announced the winner of best actor. It was Gerard! The film has since screened all over the world.

After Tropfest, Bus Stop Films was birthed and Gerard and I continued to work together. In 2012 we produced the film The Interviewer, which went on to win several awards. Since then Gerard has secured commercials, speaking engagements and even a Hollywood flick. We recently worked together in LA where we did a presentation at Disney HQ about inclusion in the film industry. Gerard is also the voice of Hubert in an ebook called I Didn’t Like Hubert for the children’s charity the Humpty Dumpty Foundation, about how befriending someone who is different can enlarge your world.

Gerard and I have become firm friends. He was at my 21st birthday party, I was at his 30th and he was a guest at my wedding. He danced with my grandmother, and midway through the reception busted out into a breakdance and the guests cheered.

Gerard is spontaneous. We were at Gerard’s for dinner once when he started reciting lines as Stephanie from The Bold and the Beautiful.

He even donned one of his mum’s house dresses, put on a wig and slathered on the make-up. My husband and I had our own private drag show!

Gerard has no fear of meeting celebrities, either. He was at Carriageworks arts centre in Sydney and saw John Cleese; he simply bounded up to him and started reciting lines from Fawlty Towers. I’ve watched him introduce himself to Nicole Kidman and Geoffrey Rush.

Knowing Gerard has changed me for the better. He challenges me to have more fun and not to worry about what others think. Gerard also gives people with and without disability the opportunity to see what’s possible. When we put him in a film it communicates a strong message: you can dream bigger!

GERARD: One of the first things Genevieve said to me when we met was, “Wow! I need to get this man in my next film.” I felt so happy and delighted to be cast in Be My Brother.

When my name was called out for best actor at Tropfest, I was over the moon. Genevieve jumped up and down with excitement and gave me a big kiss. I went to make my speech and had lipstick all over my face. Genevieve was so proud of me and I was so proud of her, too. Genevieve won best film; she got a Tropicana and I got a pineapple trophy.

“Genevieve has always believed in my ability as an actor and has taught me that you don’t have to be perfect in life to fulfil your dreams.”

Since meeting Genevieve, we have achieved so much together and have grown in our relationship. Genevieve has always believed in my ability as an actor and has taught me that you don’t have to be perfect in life to fulfil your dreams.

On set, Genevieve is very cool, calm and easygoing and she treats me with respect, which is important. She will tell me, “Gerard, just act natural and have fun with it and go with the flow.” Genevieve and I are best friends and she never frustrates me. Well, actually, one time she did. We were in Japan filming a scene from our latest project, Shakespeare in Tokyo, and I was eating okonomiyaki, which is a Japanese pancake. Genevieve said, “Cut,” but I wanted to keep eating because it was so yummy. But I respect Genevieve, so I left it behind.

Genevieve works really hard and knows what she wants. She has an amazing amount of energy even after our films have wrapped. At the after party in Tokyo, we went to a karaoke bar and Genevieve started

singing the Spice Girls and I got up and sang, “The hills are alive with the sound of music …” She has a good singing voice and she is a good actress. Before she worked behind the camera, she acted.

In Shakespeare in Tokyo, I played the part of Ben and she played the part of Carolyn and we had a Ben and Carolyn moment on a bridge in Japan. It was the first time I saw her act. We spoke a few words to each other and then waltzed on the bridge. I love to dance.

If I hadn’t met Gen, my life would look different. I would still have pursued my love of acting but it would have taken me longer. I have enriched her life and she has enriched mine. Under Genevieve’s direction I have learnt so much as an actor and can take on more complex roles. My biggest dream is to keep acting. One day, I would love to be on The Bold and the Beautiful.