IN A quiet moment in an otherwise hectic week, Genevieve Clay hugged the star of her Tropfest-winning short film.

“You’ve done well,” she said. Gerard O’Dwyer smiled as he hugged her back.

It was clear that the world’s biggest short-film festival has launched more than just careers this year – it has also forged a warm friendship between two unknowns who triumphed last Sunday night.

Clay, an elfin 20-year-old who was sleeping on a friend’s floor at Neutral Bay until recently, won the festival with the drama Be My Brother.

In his first role, O’Dwyer, a chatty 24-year-old from Guildford, was named best actor.

Their connection – and the seeds of Tropfest success – began when Clay was commissioned to make a documentary about people with Down syndrome and their dreams. She approached O’Dwyer, who has long wanted to become an actor, and was “absolutely gobsmacked” when he launched into a Shakespeare soliloquy and some comic impressions.

“I thought this guy is incredible,” she said. “If I can help him achieve his goal, I would be a very happy lady because he deserves it.”

Clay wrote Be My Brother around O’Dwyer’s personality. It has him winning over a hesitant woman at a bus stop with a similar mix of Shakespeare and impressions.

Congratulations have come from everywhere since their double triumph at Tropfest.

“It’s been amazing, and I’m moved by it,” O’Dwyer said, adding proudly that the prize included $3000 donated by Nicole Kidman. But he is still waiting for one particular call – an offer to appear on Packed To The Rafters or Home And Away. All Saints or Neighbours would be just as good.

Clay, who used three crew members with disabilities for her film, believes scriptwriters should write O’Dwyer into their shows.

“I think the film industry should be mindful of including people. It’s hard enough for people without disabilities to get a foot in the door, let alone people with disabilities.”

Some filmmakers would be wary about an actor with Down syndrome, but Clay described Tropfest’s newest star as a director’s dream.

“He’s really focused, and he learns scripts in an instant. We had three rehearsals, and he took direction wonderfully.”

Clay now wants to make a feature film, a drama about forgiveness and redemption.

And, needless to say, she plans to cast O’Dwyer.

“I’ve already written him into it. That’s for certain.” 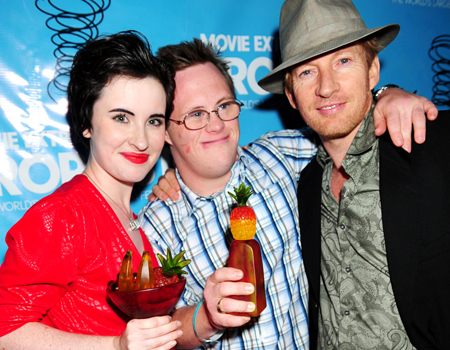