Now to Love: Filmmaker Genevieve Clay-Smith on the importance of inclusion and not ‘striving’

Studying filmmaking at the University of Technology Sydney, Genevieve Clay-Smith might have thought her career path was heading out in the normal direction — an internship or two, making short films with her friends, maybe working her way up to a paid position.
But, like any good success story, something out of the ordinary happened along the way.
Fresh out of university, Genevieve was hired to film a documentary for Down Syndrome NSW and it launched her on a completely different path. Fast forward to 2018, Genevieve has won one of the biggest filmmaking awards out there, founded two separate businesses (Bus Stop Films, and Taste Creative), and made a name for herself as not only a filmmaker, but an advocate for social change.
Picking up NSW Young Australian of the Year and the top gong for our own Australian Women’s Weekly ‘Women of the Future’ award in 2015, Ms Clay-Smith is breaking rules and changing up the game.
We caught up with her for Women to Love to talk mentors, starting her own business(es), and what’s next for Australian filmmaking. 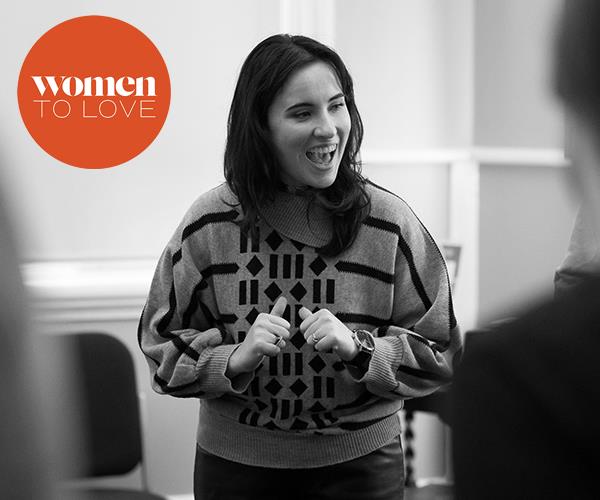 How did you get your start in filmmaking?

I’ve always been passionate about filmmaking. When I was a kid, I was an actor and I got into the industry, initially, through my love of performance and telling stories. Then I fell in love with writing something and seeing it come to fruition on the screen. I ended up studying at UTS and I started making films.
When I was about 18, I got my first paid gig as a filmmaker for Down Syndrome NSW — I was hired to make a documentary about six people with Down syndrome wanting to achieve their life goals. I ended up spending 18 months working and spending time with those six people and their families, documenting their stories, and understanding how filmmaking can create and drive social change.
After that, I married my love of filmmaking with my passion to voice diverse experiences and perspectives.

How did you found Bus Stop Films?

When I was working with Down Syndrome NSW, they were working on this project that was helping people with Down syndrome establish a circle of support around them. These people would meet with them regularly, sit and listen to their hopes and dreams, and then work out how they could help. One person’s goal was to live independently, so one person in her support group said, ‘I can teach you to cook spaghetti on a Thursday night,’ and someone else said, ‘I can teach you how to catch a bus.’ Everyone was just doing what they could do – using what they had in their hands to make a difference.
I thought to myself, ‘What can I do to make a difference?’ And I had a camera in my hands, so I thought every now and then I could do a filmmaking workshop. I taught them how to use the camera, how to frame up a shot — I got a real buzz out of it.
One of the people in the workshop, Gerard O’Dwyer, wanted to be an actor. I made a short film starring him in the lead role, with a diverse cast and crew of people with and without disabilities. In 2009, that film ended up winning Tropfest, and Gerard won Best Actor.
After that, I ended up creating Bus Stop.
What moment in your career would you consider your ‘light-bulb moment’?
When Gerard and I won Tropfest, I had this really profound moment where I realised that, through the film doing so well, we helped to dismantle some stigmas around people with intellectual disabilities — like it’s ‘too hard’ to include them in the work force, or that they slow things down, or that their inclusion compromises on quality.
Authentic casting has now become a big part of my advocacy — if you’ve got a character with a disability, you need to find the actor out there that shares that disability. Yes, it makes for a more authentic performance, but it also gives an opportunity to somebody and brings more to the role.
What have you been most proud of during your career?
I’d have to say being invited to a dinner address with Barack Obama by Mastercard! It was extremely encouraging to hear him talk about how we, as a society, need to be actively finding leadership opportunities for young people, and we need to be giving them more space to give their input and opinions.
If you could go back in time, what advice would you give your 13-year-old self?
I’d tell myself, ‘Enjoy the ride, don’t strive’. In this day and age, especially with social media and the culture of comparison, judging your achievements against others is so unhealthy. A lot of the best opportunities that have come my way have been through gently opening the door; forming a relationship with someone, and furthering that relationship. It’s never been a case of me banging down the door, or wrestling an opportunity out of a situation.
Don’t compare yourself to anyone, stick to your own game plan, and back yourself.

Looking back, is there a career moment you wish you’d handled differently?

As a business owner, I would go back and learn a lot of more about patience and interpreting information, while still giving the benefit of the doubt.
In my early 20s, if something went wrong, I would immediately go to a negative place or think the worst of them. I wish I had more patience to investigate and find out the full story. It was one of my flaws that I was too quick to judge. I like to think that now I’ve got that in a really good place. You have to allow people the space to fail and make mistakes and realise that it’s just part of the journey.
How can your industry adapt and change?
The film industry just needs to keep the momentum going. We’ve started some really important things, and now we really need to start pushing it further. I’d like to see broadcasters and producers with inclusion charters. With what Frances McDormand said, it would be great to see high-profile Australian actors jump on the inclusion riders and start negotiating with their own contracts.
Australia, in the context of the global diversity scene, is doing okay. The things we are doing, we’re doing well, but we can’t rest on our laurels, there’s always room for continuous improvement.

Have you experienced sexism at work?

There have been instances where only in hindsight have I realised it was sexism. There was one time, I was waitressing at a bar and there was a famous director there. My boss said, ‘Take off early and network with him.’ We sat together and chatted for ages, and I thought I might be able to get an internship. And then he said, ‘Do you want to get out of here?’ And my world crumbled. I tried to assert that this was about business, but he didn’t care. I went home that night and I cried. I was only 19. It was so disheartening. As I’ve grown and started my own business, I found a lot more confidence to deal with that kind of thing.
Who’s been your biggest champion/mentor and why?
I don’t just have one. I try and get advice from many different people, and I try to be mentored by many different people for different reasons. But I think it’s important that, when someone’s mentoring me, I’m mentoring someone, too. It comes back to that documentary I did with Down Syndrome NSW. How can I use what I have in my hands to make a difference?
view original article