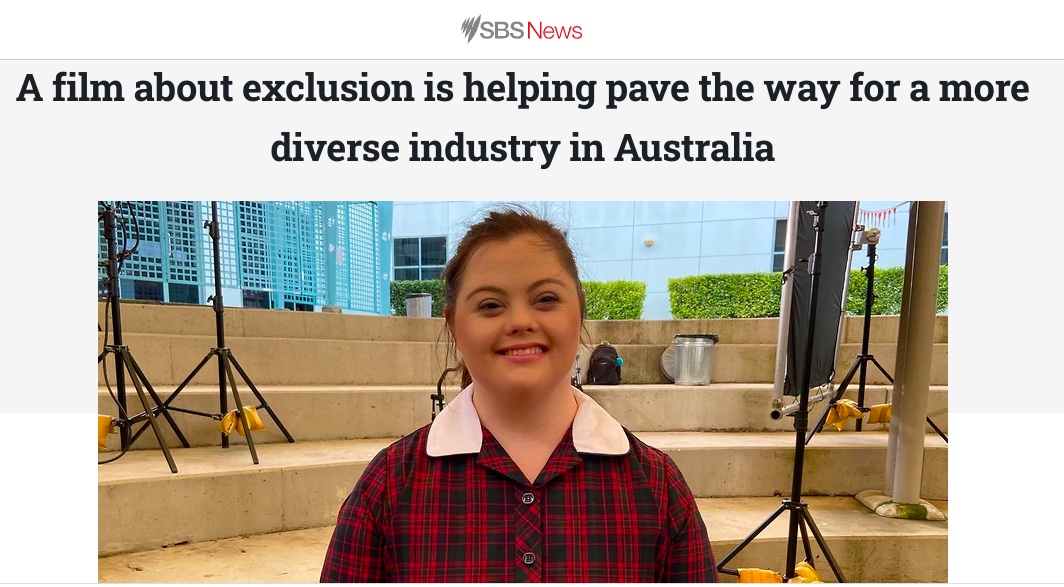 A new toolkit aims to increase the inclusion of people with a disability in the Australian film industry, both in front of and behind the camera.

For Audrey O’Connor, acting in a film she wrote herself quite literally is a dream come true.

The filmmaker, who lives with Down syndrome, said she decided to enter the industry when she was just 15 years old after she had a dream that she was on a film set.

“I wasn’t sure if it was acting or being behind the set, I think I just loved both on the spot,” the 29-year-old said. “It’s a really good industry.”

On Wednesday, she was on set in Sydney filming her new film See Me, produced by Bus Stop Films, based on a story she wrote about going through high school with a disability.

With 60 per cent of the actors in the film and 11 involved in the scripting process living with a disability, O’Connor hopes the film will inspire other people living with Down syndrome to “have a voice”.

“I want to show that people who are like me … we can also make a difference to the world and show who we really are,” she said.

“It’s important for us to share our own stories.”

In an effort to encourage just that, Bus Stop Films on Friday will release their Inclusive Filmmaking Toolkit, which outlines best practice principles to create meaningful inclusion of people with disabilities in front of and behind the camera.

Co-founder of Bus Stop Films, Genevieve Clay-Smith, said she hopes the toolkit will lead to increased representation of people with a disability in the film industry, at a time when conversations about diversity are at the forefront.

“Meaningful inclusion and being a part of scriptwriting, storytelling, being a part of the process before you even get on to set, is so important because people with the lived experience of disability can only bring that experience,” she said.

“The film industry is our industry of storytelling and if we are leaving people out of the creation of stories, if we are leaving them out of representing themselves on screen, then we are missing quite a large percentage of the population.”

Bus Stop Films was founded more than a decade ago with the goal of getting more people with disabilities into the industry and telling their own stories.

Aside from producing films, the not-for-profit also runs accessible filmmaking programs for people eager to break into the industry.

“What it means is more lives will be transformed,” Clay-Smith said.

“Because they’re going to be able to be included in this beautiful, amazing, marvelous, magical industry called the film industry that tells stories and stories change the world.”