THE desire to “start a conversation” about refugees in Australia led Isha Kamara to help create a film showcasing the Sydney Sudanese community to the world.

Ms Kamara helped bring short film I Am Emmanuel, directed by Genevieve Clay-Smith, to the screen.

A former asylum seeker from Sierra Leone, she was a resident of Bankstown at the time of shooting.

She served as co-producer and casting director on the film, which was shot largely in Bankstown.

I Am Emmanuel tells the story of two brothers adjusting to life in Australia after fleeing from Sudan.

It was shown at the Palm Springs International Film Festival, where Ms ­Kamara said it was “very well­-received”.

The film will be screened at other festivals around the world and Ms Kamara said they were hoping to have a special showing in Blacktown.

I Am Emmanuel has previously been screened at Riverside Theatres in Parramatta.

She said it was ­received with thanks from the Sudanese community.

“We wanted the film to start a conversation about refugees in Australia, and how asylum seekers are treated by the government and the media,” she said.

“So it was great to see people talking about those issues after the screening.”

She said the current refugee policies of the government had been “very much” on the minds of the filmmakers.

“It’s a very important film for multicultural communities like Canterbury-Bankstown,” she said.

“The multicultural experience is not often given an on-screen treatment.” 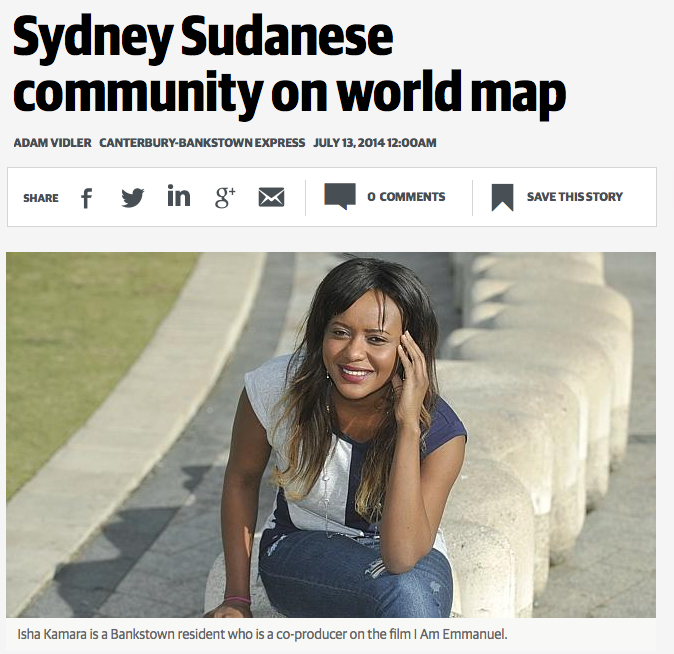